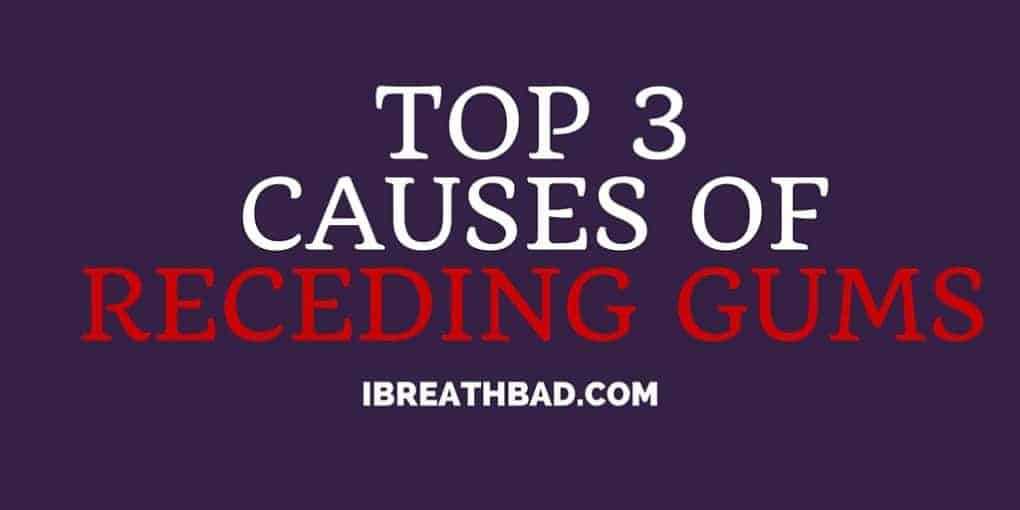 To halt the progression of receding gums and potentially reverse the condition the first thing you need to understand is how it happened in the first place. Once you understand this you can take action to combat the issue by solving the problem at its root.

Here’s the first cause of receding gums:

Sometimes enthusiastic oral hygiene routines have the opposite of the desired effect. We may tend to think that a vigorous scrub is the best way to ensure clean and sparkling teeth however it is important to remember that our gums are in fact very soft and vulnerable.

Stop for a moment to feel your own gums with your tongue or finger and notice just how soft and sensitive they are.

There’s a reason injections into the gum are so painful! Regularly scrubbing the teeth sideways with a hard bristled brush is far too much for this vulnerable tissue to handle and over time it is worn away and pushed out of position.

In some cases this factor alone is the primary cause of receding gums.

The first point of action for anyone suffering gum recession is to examine their oral hygiene routine and look for ways to make it less abrasive while simultaneously maintaining or improving its effectiveness at cleaning the mouth.

Teeth cleaning should not be done in the way one scrubs a hard floor or dirty pan; the rapid and harsh “get it done fast” approach is not ideal to say the least. In

stead, the teeth should be cleaned in the same way one would clean a priceless antique, softly and gently with the utmost care to avoid damage.

When we are born our mouths are sterile and free of bacteria for around the first ten hours of our life. From that point forward bacteria begins to accumulate in the mouth and removing it is a process that has to be kept up daily for our entire lifespan.

When bacteria is allowed to build up it causes a process that gradually dissolves teeth and gums – a major component of gum recession. It is important to have a basic understanding of what this bacteria does in the mouth so you are clear on what you have to do to stop it.

Why Bacteria Leads to Decay?

The two specific types of bacteria that love to live in our mouth are the “Mutans Streptococci” and the “Lactobacilli”. These bacteria hang out around our teeth for a very good reason; they love to eat sugar.

Since sugar is found in every single type of food, each time we eat a meal sugary residues are left on our teeth for these bacteria to crowd around and chew on. In other words, the bacteria in our mouth feeds on our leftovers!

Yet surprisingly it is not the actual bacteria feeding process that causes us problems. The real problematic part of this process – the part that causes the degradation of our teeth and gums – takes place after the bacteria have eaten their fill.

Much like ourselves, after eating a meal these bacteria ‘digest’ their food and then excrete a waste byproduct. In this case their highly acidic waste gets deposited all over our teeth and gums and gradually dissolves them every second it is left unchecked.

The longer the acid is left on the teeth and gums the more damage it does. This is also the reason why highly sugary foods lead to faster rates of decay.

With sugar being the favorite food of Mutans Streptococci and Lactobacilli, the more of it you leave on your teeth the bigger the crowd of bacteria that will gather around to feast…and the more acidic refuse you’ll accumulate.

The longer you leave it there the nastier will be the result. It’s no wonder dentists are always telling us to clean our teeth as quickly as possible after eating!

​These large crowds of bacteria enjoy the sugar party on your teeth so much that they will actually start to form what is called a “colony”.

They produce a film that helps them to easily cling to a tooth so they can keep on eating and excreting with minimal effort.

This combination of film and bacteria is called a “biofilm” and this particular type is the white goop we all know as “plaque”.

Plaque becomes the bacteria’s home in your mouth and it also forces the acid they excrete to be held directly against your teeth, maximizing the damage caused. It all happens on a tiny scale but the damage it does to your teeth and gums is no small matter.

Plaque is soft enough that it can be removed with a toothbrush but every second you leave it there the bacteria will keep trying to build themselves a more solid home.

After 48 hours plaque starts to harden and after around ten days it will have turned into a rock-solid substance called “tartar” that is much more difficult to remove.

Even if you regularly clean your teeth it is possible to miss some plaque if your technique is not correct and this can easily become tartar.

The third cause of receding gums can be the most common cause, and it is:

In some cases hereditary issues can be the cause of thin and weak gum tissue, making a person more susceptible to gum recession. However just because a problem is hereditary does not mean it cannot be treated.

There are certain dietary choices that can be made to give the gums extra strength and a top quality oral hygiene routine will give the body the best possible chance of full health despite congenital weakness.

Even for those without hereditary gum problems there are key nutrients that must be sufficiently present in the diet if the gums and teeth are to remain strong.

Anyone suffering from receding gums should be aware of these key nutrients and take action to incorporate them into their diet and oral hygiene routine.

NOTE: Smoking, dipping and chewing tobacco are known to weaken the gums and, fortunately, either of these issues can be removed simply by making the right personal choice.

Additionally, if you have a tongue or lip piercing the rubbing of the jewelry on your gums and teeth will invariably wear them down. This is the case regardless of the type of jewelry worn, so you will have to remove it permanently to prevent further damage.

Remember, your health is more important than your appearance!

Stop Gum Pain Before Something Bad Happens
How To Do Gum Disease Treatment At Home Naturally?